On the Journey to Oregon, my old college roommate, Ashley, hosted me for a night in Omaha, NE. We had a lot of catching up to do and I was curious as to how and why she ended up in Nebraska. I found her story compelling and she agreed to allow me to share it, interview style. She leads as an excellent example in the wisdom in her choices, courage to follow them through, and self-reliance. 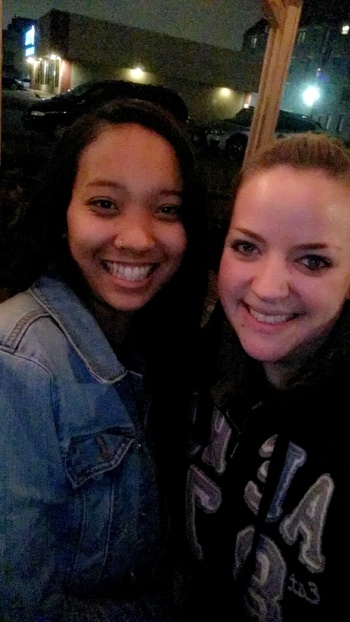 How did you end up in Omaha, Nebraska?

I threw a dart at the map. I thought of every city where I knew somebody, at least one person, and I wrote all of the cities down on post-it notes. I stuck them to a dart board and I threw a dart. It landed on Nebraska, so I called the one friend that I knew there. Within a week or two she had found a studio apartment for me, I gave my job a two week notice, sold everything I owned and fit everything I could in my Mazda and moved out here.

Was there a straw that broke the camel’s back or did you know for a long time that you wanted to move?

It’s always been in the back of my head that I didn’t want to live where I grew up. I’ve always been adventurous, so I wouldn’t say it was one thing, it was just, “I’m just going to fucking doing it.  And I hated my job, I hated my life, I hated the city I lived in, so it’s just going to happen.”

How did you feel on the day you left?

Anxious, excited, nervous. I got on 39, which is the highway out of Rockford that leads you to I-80, which is the highway that leads you across the country. A specific lyric came on that really struck me, “I know I left a life behind, but I’m too relieved to grieve”. I got emotional and started crying. I was leaving everything I’ve known behind, but I was so relieved to be leaving that it didn’t even bother me.

How do you feel about your decision?

I think it’s the best decision I’ve ever made. It taught me a lot. I’m still growing and I’m still learning, but it taught me a lot about independence and brought me to Emily. I went through the jobs that I thought I was supposed to go through with my college degree. I learned that I didn’t like them and I’m kind of starting over, but I don’t regret it for a day, not for a second.

How did you know what to pack?

I didn’t. I packed my clothes, toiletries, and a few sentimental items, like this sign on the wall, “It’s not daydreaming if you decide to make it reality.” That was kind of motivation that was a gift from my aunt a long time ago. I basically packed for an extended vacation. I bought other things when I got here, but only the necessities. I have what I need.

The age-old question…what did your family think?

They were excited actually. I thought they would be like, “this is another Ashley stunt” but my dad was actually really excited. My mom was scared. She’s a mom, she’ll be scared. But he looked at her and said, “I think she should do it, that’s what we did.” That’s what they did when they got married, up and moved to somewhere they didn’t know anyone. I thought he’d say I was being irrational, but he said, “Rockford sucks, we all know it sucks, she’s mature.” That’s what got them out of Indiana and building a life for themselves. I was prepared for resistance and happily accepted their encouragement.

What did you do for work?

I had a job lined up because my friend found a restaurant that was hiring. I went in for an interview and they hired me on the spot as a server.

How are you stringing your passions together now?

In my life, starting over was the best thing to ever happen to me. I still have my college degrees, those are never going to go away. I still have the life experience and wisdom, that will not go away. To move to a new place and not know anybody, you always have those experiences and knowledge to fall back on. But starting over is the way to make sure you do what you want and do it right this time, even with trial and error. You don’t have to be stuck in the same meaningless job or hate-filled life.

I did fail. I slept in my car for a month, but I got back up and worked my way back up. Starting over in a new place is scary and it’s hard and I made a lot of bad choices. I ended up homeless for a little while, but I fixed it, realized what I’d done wrong, and gave myself a reality check.

You realize what it is about your life you don’t like and fix it or change it. Make it so you do like it.

What has been the best and worst part about your move to Nebraska?

The best part is Emily and the people I’ve met. I’ve gained a lot of experience professionally and socially. They’ve led me to lifelong friendships and the girl of my dreams. I’ve also found a job that I like and I’m good at.

The worst part is since I’ve lived here, my brother has gotten married and had two kids and I’m not a part of my niece and nephew’s lives. I’m the distant aunt and I wish I was more a part of their lives. But everybody’s just a phone call away. I still talk to my mom twice a week, text my brother and dad.

What would you say to people who feel too hesitant to make this kind of move?

In my circumstance it worked out really well because I don’t have kids, I don’t have a family, I have just me. For people with families it might be harder, but I also have a friend with a family who has done it, so it is possible. It took her a year to do it because of her family, but she did it. The only thing stopping you is you. I had no money. I only had money saved up for the deposit. I had no money or family, if you want to do it, just do it.

Would you encourage others to do this?

To my readers – would you move somewhere on a dart’s throw? Have you?

My name is Jamela and I'm a restoration ecologist, hiker, and plant lover. I'm here to advocate for frugal living and travel and to provide others with resources to achieve both. Let's discuss your dreams! View all posts by JamCafe